What are the steps in the essay writing process?

How long does the editing process take for each essay?

Each application essay can require up to 3-4 revision cycles or more. Dr. M typically expects to see an “editable” draft approximately a month before the application deadline (see specific dates below). This gives ample time for the student and counselor to implement Dr. M’s feedback and resubmit drafts to her for finalization. While counselors can review and revise essays with students multiple times during a week, Dr. M reviews essays on Mondays. If a student misses a deadline and doesn’t get an essay in to Dr. M before her review day, s/he can fall behind.

For EA/ED schools due 11/1. students have approximately 8 weeks to draft and finalize essays and applications: the months of September and October. That may seem like a lot of time, but remember – students applying to 10 schools cannot work only on EA/ED applications for those 8 weeks – they also have to begin drafting essays for other schools, due later. The UC’s will be due only 4 weeks later and the 1/1 schools not long after that.

Counselor and student will establish a schedule of when drafts are due – this schedule is sent to both students and parents. Please note that in order to draft all essays on a timely basis, most students will draft two essays a week – one each on each day of the weekend. Once October comes, they might be revising a few essays while also drafting new ones.

We have found in our experience that students and parents often underestimate the amount of time it takes to produce thoughtful, competitive application essays. One key factor is that California’s educational ranking out of the 50 U.S. states is far from stellar. Therefore, essays that students write that may be perfectly acceptable to schools and teachers in California may not compare favorably with those written by students in more highly ranked states, such as Massachusetts. Generally speaking, it can take additional time for California, it can take additional time for California students’ essays to be brought up to “Massachusetts” levels. 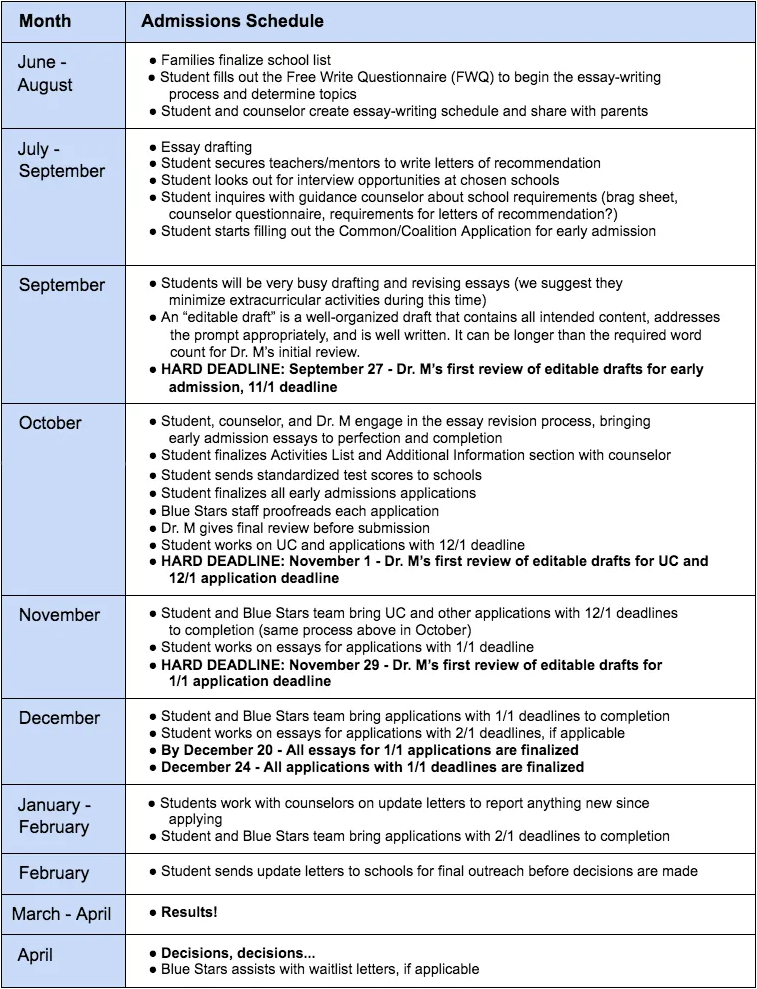