Worth the Rush? The Race to Early Acceptance at Elite Schools

Have you been considering applying Early Action or Early Decision to your choice university? Consider the following scenario.

It’s December 15, and you’re on the bus with your team headed to an away game, too nervous to login to your admissions account at your choice school. The clock ticks. It’s 5:01 p.m. — surely the decision must be posted by now.

You take a deep breath, pull out the phone, login, squint at the screen, do a double take, pause. You look again and then, you start jumping, screaming, crying, and shouting, “I got in! I got in!” Your teammates swarm around and hug you. “Congrats!” they all yell. Of course, you win the game, too. Or maybe you don’t, but it doesn’t matter because not only did you get accepted early to your dream school, you can now cease and desist all further essay writing and fantasize about a chill Christmas break. Life is good.

Dreamy, isn’t it? As an admissions consultant, I will admit that I, too, share the early admissions fantasy. I will also admit that such a slam dunk is even more fantastic in reality, and I can easily recite many moments of admissions bliss.

Equally and perhaps even more satisfying, however, are the March/April triumphs: the lists of schools reported in emails of glee, the heart-to-hearts about the right choice among a plethora of right choices, the merit scholarship packages. April is definitely my favorite month. Then, in the summer, wait list decisions are made, and bliss returns. Just last August, after wooing Cornell through several update letters, a student from Chongqing interested in economics and international development wrote to tell me she had been accepted. A perfect fit! She won, too.

From a bird’s-eye view, no one win is more valuable than another. So which route is best for you?

The most persuasive argument for applying early is the acceptance rates, which are consistently, and in some cases considerably, higher at the most selective schools. 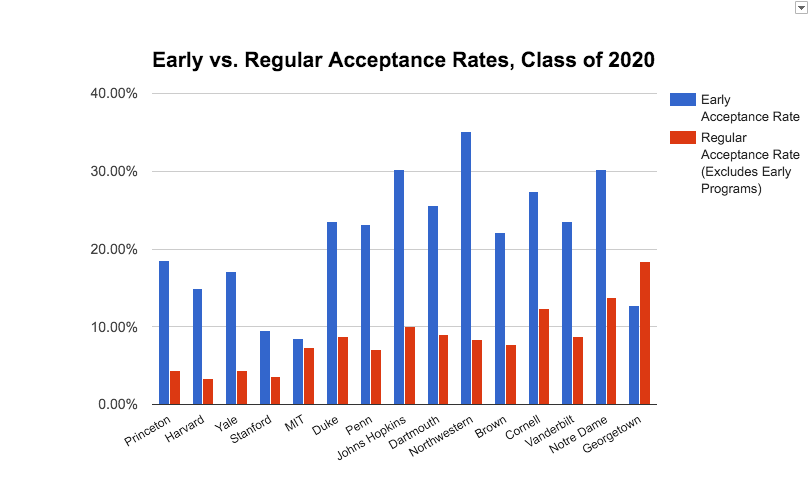 All is not as exactly as it seems, however. These data points — “imperfect but serviceable,” as Priceonomics writer Alex Mayyasi concedes — mask a more complicated scenario, one that might require a larger data set accounting for certain subpopulations, such as recruited athletes. Working in tandem with coaches looking to build next year’s teams, admissions officers at Ivy League and NESCAC schools designate part of the admitted pool to athletic recruitment, a practice that reduces the space available to competitive, non-athletic candidates. Yale, for example, recruits about 180 athletes a year, the vast majority through early acceptance (and there is discussion of increasing recruitment to 200, matching Harvard and Princeton’s caps). If one considers the 753 students accepted early to Yale in 2014, the athletic pool constitutes approximately 24 percent of early acceptances, reducing the early acceptance rate for non-recruits from 16 to 12 percent.

Dartmouth, which reserves 19 percent of its student body for recruited athletes, offers a corrective in its admissions FAQ, noting only a “slight statistical advantage to applying Early Decision” and then elaborating parenthetically:

(The published higher percentage of applicants accepted early is somewhat misleading because it includes recruited Division 1 athletes, whose credentials have been reviewed in advance. With recruited athletes removed from the Early Decision numbers, the advantage is much smaller.)

Harvard, too, cautions on its admissions page that it “does not offer an advantage to students who apply early. Higher Early Action acceptance rates reflect the remarkable strength of Early Action pools. For any individual student, the final decision will be the same whether the student applies Early Action or Regular Decision.”

To better understand the inflationary nature of the early admission acceptance rate, it is important to note that among its many purposes, the early admission process serves the strategic aims of universities. Besides a desire to snag the most interesting, and interested, candidates of the year, they also target certain populations such as applicants with strong alumni ties, or exceptional musical talent, or perhaps a student from an underrepresented state (schools love to boast about the incoming class representing all 50 states). As seen with athletics, every institution — operating in its own particular social and economic context — has particular needs, some of which are negotiated through early admissions processes, further shrinking the space for the general population.

Deciding to apply early involves more than a laser focus on acceptance rates, however. The decision is different depending on which program your chosen school employs. Early admissions programs vary in kind. Harvard, Yale, Princeton, and Stanford use a Single-Choice Early Action program (EA), restricting your early application to only one school without binding you to a decision upon acceptance. If accepted EA, you can wait for the rest of your results in April to make your final decision. EA gives you more freedom of choice, unlike Early Decision (ED) (practiced by schools such as Brown, Columbia, Cornell, and Dartmouth, which requires a commitment to attend upon acceptance. If admitted ED, otherwise known as a binding decision, you will be expected to withdraw all other applications. Most free of all is the unrestricted EA program, as practiced by MIT, Caltech, University of Michigan, University of Chicago, and University of Virginia.

The decision to apply early requires a deliberate choice about the flow and character of the admissions process for you. Are you ready to relinquish all other opportunities, including financial aid opportunities, should you be accepted ED? Are you prepared for rejection in the middle of December, just as you’ll need to launch an energetic second sailing to finish the rest of your applications, if you’ve not already done so? Can you handle a little drama during an already stressful time of your life, or would you prefer a more even-keeled, paced approach? Do you want to cast a wide net for EA, rush to the early finish line, and see what comes of it, ready to renew the effort, should the results not turn out your way?

To further inform your decision, consider, too, how universities strategically use their early admissions programs. Schools without worries about yield rates like Stanford (the percentage of accepted students who choose to attend), tend toward EA, since a high percentage of accepted students will inevitably attend. These schools will retain their yield rate, a key factor in US News and World Report ratings, no matter what.

Schools like Dartmouth, Cornell, Columbia, and Penn, however, secure talent otherwise headed to their even more elite competitors through a binding decision, ultimately a recruitment tool. Alternatively, Yale aims to gradually reduce its EA acceptances “to make room for equally deserving candidates in the larger, more diverse, regular pool.” If you’re a competitive student for any of these highly selective schools and are determined to attend one of the country’s best universities, you might want to consider applying ED.

If, on the other hand, you want to toss your hat in the EA ring, bank on deferral, and accept the possibility of having to wait it out, applying EA to a school with a high deferral rate such as Harvard, Princeton, or Yale could be a good choice. To help you with such nuanced deliberations, check out the following data (and below them, there’s more to this article!): 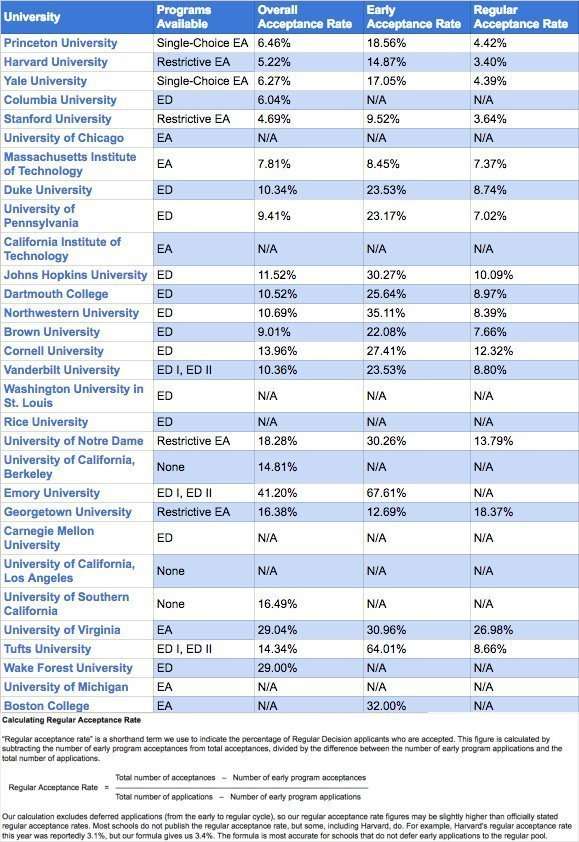 Decisions, decisions! They are all yours. When it comes to life-changing, path-defining moments, the more you inform yourself, the more solid your decisions will be. Early admission provides a great motivating opportunity for some applicants. It can be a tough journey for others.

Whatever you do — whether you apply ED, EA, or RD — think thoroughly about all of the possible approaches to your stunning future and pursue as many as possible. Instead of fixating on a singular outcome, dream more expansively, keeping a broad vision and casting a wider net while focusing on your core identity. If you can maintain a balance between focus and measure during the admissions process, you’ll have received great training for studying at a premier institution.